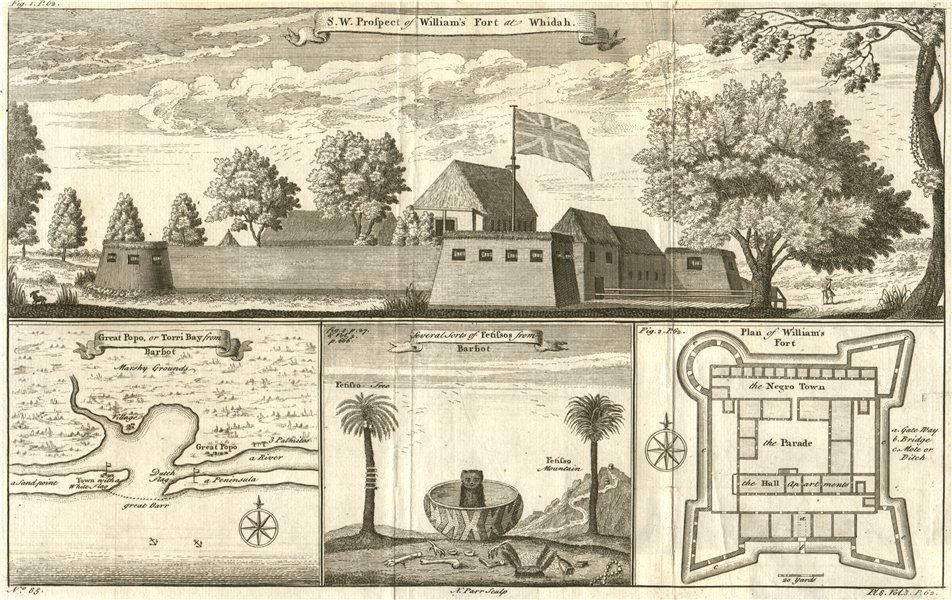 Ouidah was the second largest slave port in the Atlantic slave trade behind Luanda in Angola. From the 1670s to the 1860s, the city supplied well over an estimated one million enslaved Africans to the trade.

In the early modern period, the West African Kingdom of Dahomey expanded into the region now belonging to modern Benin. It shared a border with the Kingdom of Whydah, which included the city of Ouidah and its surroundings. Whydah had become wealthy in part through trade in slaves to both Europeans who came to Benin’s coast, as well as Arab traders who approached the kingdom through the Trans-Saharan trade routes, and Dahomey followed suit. In 1472, Dahomey signed a treaty with the Portuguese for trading rights, though Dahomey participated in the early modern slave trade through the selling of war captives to other European slave traders. In 1727, King Agaja of Dahomey captured the port city of Ouidah and folded the entire Kingdom of Whydah it into his thriving kingdom. Portuguese, English, Dutch, and French traders who had connections with Dahomey built forts in or near the city from which to engage in the slave trade.

The next century saw a cycle of slave and palm oil trade in Dahomean Ouidah as the European traders there vied for access to African trading partners. With the decline in the Atlantic slave trade in the 1830s, palm oil became the main commodity traded from the fort. Under King Glele’s rule (1858-1877), there was a revival of the slave trade as Brazilian slavers came to Benin searching for enslaved Africans. This caused the British to blockade the port, and offered an opportunity for the French to gain influence with the locals. By then, the age of colonization had drastically driven down the price of palm oil, as Europeans could now easily get it from any number of places in Africa. The port of Ouidah fell into decline.

The SSDA Ouidah collection collection includes transcriptions of 19th-century Portuguese-language baptismal records from the chapel of the Portuguese fortress São João Baptista de Ajudá (Fort of St. John the Baptist of Ouidah), from 1866-1884. These documents are from the period immediately after the final cessation of Brazil's Atlantic slave trade.

The original volume seems to be lost. The documents collected here include a photocopy of a transcription of that volume produced by Pierre Verger, a French anthropologist and photographer who worked in Dahomey from 1935 through the 1970s. It was obtained by Prof. Mariza de Carvalho Soares in Ouidah in 2005. She graciously donated the photocopy to widen access to it, and to ensure its digital preservation. Denise Vieira Demetrio, one of Prof. Soares's students, recopied Verger's transcription for paleographic practice, and her work is presented here as well.